This data belongs to the photos of the camera below. 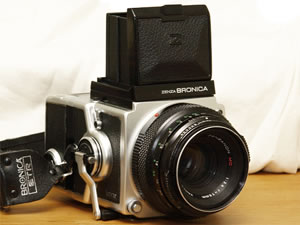 Throughout the life of the ETR line Bronica kept producing chrome bodies and backs, starting from the introduction in 1976. They made chrome ETR and ETRS bodies and chrome 120, 220, and 70mm backs probably until 1981 when they switched from metal body panels to polycarbonate. Then in 1996 they produced the Limited Edition chrome ETR-Si body and matching chrome Ei 120 back. The original chrome ETR and ETRS bodies came with chrome winding cranks, while the 1996 Limited ETRSi came with a standard black crank. Also the ETR and ETRS backs had chrome shells/frames and chrome inserts, while the 1996 chrome 120 backs had a standard black painted shell with a chrome insert.

An ETR manual that shows the original chrome components of the system is available online.[6]

There were never any chrome metal finders, though most of the pre-1981 finders seem to have been black painted metal just like the standard black bodies. 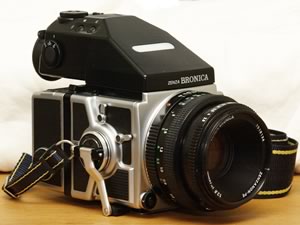 Confusingly, there was a later, champagne chrome colored polycarbonate 40th Anniversary edition that did have its own matching AE-III Finder, Speed Grip, and 75mm lens. This set uses grey instead of black leatherette. It is very pretty (and Bronica used its great original type and logo from the 60s)-- but it does not match any previous silver chrome components.

Original ETR and ETRS chrome bodies, backs, and cranks all look good and work well together with the other standard black components and the 1996 chrome Special Edition.[7]

One can replace the black plastic ME and MLU levers and the whole winder cover of the 1996 edition with metal chrome versions scavenged from any black metal paint ETR or early ETRS parts bodies. Doing so makes a thoroughly modern ETRSi body reminiscent of the Bronica S and S2 series -- and more importantly gives a very rugged, compact, modern medium format body.

Retrieved from "https://camerapedia.fandom.com/wiki/Zenza_Bronica_ETR?oldid=125249"
Community content is available under GFDL unless otherwise noted.