Vito CD is 35mm film viewfinder camera made by Voigtländer and produced between 1961-66. It belongs to the Vito C series. 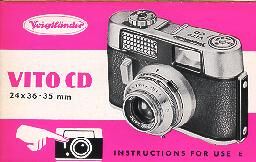 Retrieved from "https://camerapedia.fandom.com/wiki/VoigtlÃ¤nder_Vito_CD?oldid=119556"
Community content is available under GFDL unless otherwise noted.