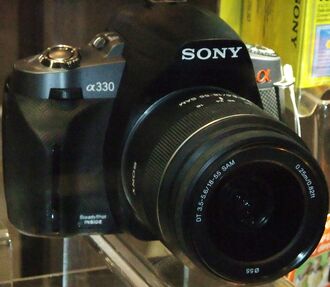 The Sony α330 (Sony Alpha DSLR-A330) is a DSLR body with 10.2 Megapixel CCD image sensor and Minolta AF lens mount. It was successor of the Sony Alpha DSLR-A300 and part of a partially misconstructed sub-series of the Sony α system, i.e. the α230, α330 and α380. The Sony designers didn't give these bodies the ergonomical grip that is common for automatic autofocus SLRs since the 1990s. Instead they made the bodies "stylish". Nevertheless the α330 was a proper entry model for the α system, available for a moderate price, and including features already known from Minolta AF SLR bodies, for example the 9-field autofocus with "eye-start". It has inherited its "Steady Shot™" sensor-bound anti-shake mechatronics from the Sony Alpha DSLR-A100 and Konica Minolta Dynax 7D. Its "Live-View" mode goes beyond these predecessing models, making it possible to use its 2.7" color LCD as finder instead of its normal SLR pentaprism viewfinder.