These cameras were designed to be inexpensive and accessible to the public. It is a very simple viewfinder camera made of bakelite. It has a removable back and uses cassette to cassette film transport. All controls are on the lens/shutter barrel.

The long lasting Smena series went through at least 15 versions, running until the 1990s.

Smena had a bakelite body and was equipped with a three element lens (Cooke triplet) with a leaf shutter. Early versions had separate shutter release lever on the lens and a frame counter release button on top of the body, later series were equipped with a single button on the body combining both functions. Smena, as well as all subsequent versions till the Smena 7, had no film rewind capability and two cassettes had always to be used. 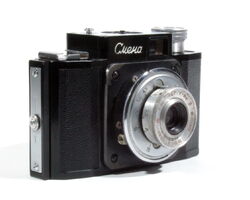 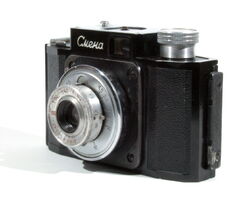