Are disposable cameras or single-use cameras[1] the peak of decadency in the photo consumer world? Maybe the original peer group for such cameras were travelling tourists who forgot their camera at home. They can avail themselves of disposables at the town where they spend their holidays. After the journey they can give these cameras to their photo dealer who gives them to a film development company. What the customers get back from their photo dealers after some days are the developed films plus prints. The cameras will be disposed or recycled elsewhere. Nowadays disposable cameras are also a collector's obsession or photographic material for lomography. Single use cameras were first made by Fuji in 1986 with the Quicksnap (Utsurun-Desu in Japan), followed by most film manufacturers, such as Agfa, Ferrania, Kodak, Konica and other manufacturers.

A very old concept of rollfilm box camera (Kodak No. 1) was revived as single-use concept with the Hollywood Camera. For development of the 12 exposure film roll the whole camera had to be sent with user address written and 6 cent stamp put on it to its manufacturer Encore Camera Co., P.O. Box 208, Hollywood 28, Calif. , or P.O. Pox 222, Delano, Calif. . The developed film and prints were sent back from there together with coupons for unprintable exposures. The box had a prepayment slot to put in $1.25 for development or a smaller amount together with coupons. It had a sports finder on top, a simple shutter for instant mode with shutter release lever, a red exposure counting window in the back, and a film advance knob. 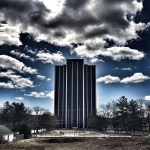