The Moskva-5 (MOCKBA-5 in cyrillic) is a medium format rangefinder folding camera made by KMZ and produced between 1956-60.

Its main difference from Moskva-4 is added selftimer.

Earlier models of the Moskva were copies of the Zeiss Ikon Super Ikonta C. Unlike earlier models, this model is a Zeiss Super Ikonta adapted form, rather than a clone and unlike the Super Ikonta, its solid top plate has a built-in rangefinder and a dual-format viewfinder. Moskva-5 is the latest model in a series of cameras Moskva brand. Main difference from Moskva-4 is added self timer. The Moskva-5 was undoubtedly designed as an expensive professional camera, and not as an amateur model. It was built in an age (1956–1960) when 35mm photography was already suppressing 120-film, and only professionals still insisted on using the larger format. Its dual-format characteristics, rangefinder and excellent lens and finish indicate professional use also. Apparently these cameras were used until very late (the 1980's?) by Moscow street photographers.

The back of the camera showing the year of production (1958), two red windows for 6×6 and 6×9 numbering, the rangefinder window (left) and the separate viewfinder window (right). The symbol to the left of the serial number is the Krasnogorsk company logo.

Super Ikontas were made either for the 6×9 or 6×4.5 format. The Moskva-5 is a 6×6 and 6×9 camera. Since it has a fixed 105mm Industar lens, at 6×6 you have a mild tele at your disposal. To use the 6×6 size, you need to set the viewfinder to the square format. there is a lever to select the right window so you can see the numbering on the film back. The pressure plate does not need to be removed. The 6×9 red window is now blocked, so there's no room for confusion.

As a last step, the 6×6 mask has to be inserted. The camera locks right into its holes. Close the camera and you're ready to shoot.

The Moment 24c is a leaf shutter with speeds of B, 1 to 1/250s. To fire it, the film needs to be transported or the release button will be blocked, indicated by a red window on the top plate. The shutter isn't set by advancing the film; it has to be cocked at the lens by a lever. To take a picture, press the button on the left of the camera top. The button on the right is for unlocking the front plate when the camera is collapsed. Before folding the camera, you shouldn't forget to push down the lever with the glass window. 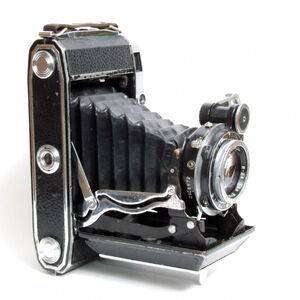 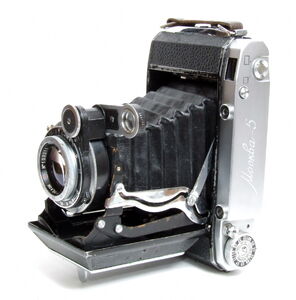 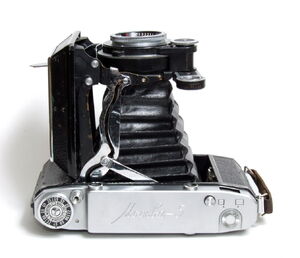 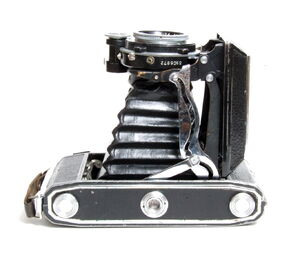 Data belongs to the camera type 2b in the photos. 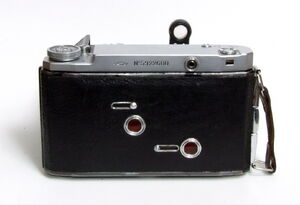 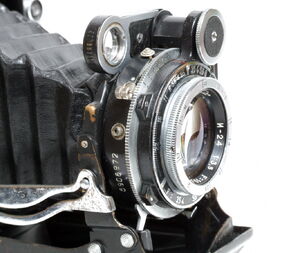 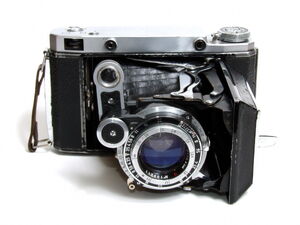 The camera may suffer from light leaks. Light could enter the camera around the windows or through the sliders in the back cover to open the red windows. Light might also come in through small tears and holes in the billow. This page discribes how to fix the back cover light leaks.

A possible fix is to glue a peace of cloth (micro fiber) on to the back plate to cover the sides of the plate that presses against the paper of the film.