The Minolta SR-T 101[1] is a 35mm SLR camera made by Minolta Camera Co. Ltd, Japan, premiering in the March 1966 Japan Camera Show [2]. Sales began in April 1966 and it stayed in production with only minor changes for ten years, the result of the thorough development effort that was put into the camera. The body is a direct continuation of the Minolta SR-7 model V of 1962, itself an innovative camera, with the addition of through-the-lens (TTL) metering and additional features.

While the 1963 Topcon RE Super pioneered full aperture metering and the 1964 Pentax Spotmatic used two cells for averaging metering, no other Japanese SLRs available in 1966 combined all of the above innovations. 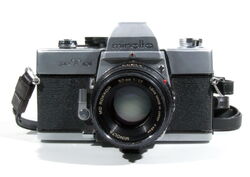 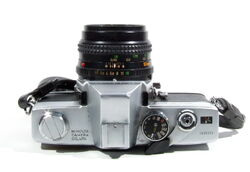 When first introduced, the standard kit lens was the 58mm/f1.4 MC Rokkor-PF, with 6 elements in 5 groups. About four months after launch, the 55mm/f1.7 MC Rokkor-PF, 6 elements in 5 groups, was added as an alternate kit lens. Then in September 1968[3], the 58mm/f1.2 MC Rokkor-PG, 7 elements in 5 groups with 8 aperture blades, became available. These earlier kit lenses featured knurled metal barrels, versus later rubber-gripped MC Rokkor-X (or MC Rokkor) versions. A very well crafted ever-ready case was available in either brown or black leather to protect the camera with normal lens. A longer-nosed black ever-ready case was made for the SR-T101 and 58mm/f1.2 combination.

The SR-T has a bright finder with a central micro prism focusing aid that proves to be very accurate in most cases, since even when no visible lines are present in the subject, all out-of-focus objects appear to shimmer. Two exposure meter needles and the selected shutter speed are shown in the viewfinder. A small rectangle to the right indicates the acceptable needle deflection range for a healthy battery when the ON/OFF switch on the camera base is set to the battery check position labelled BC. Battery power is saved by placing the switch in the OFF position whenever the camera is not used. Battery power may also be saved by keeping the lens cap on whenever possible, since the exposure meter draws current in proportion to light intensity entering the camera lens. The metering circuit is dependent on an obsolete mercury battery. It may be replaced using a zinc-air hearing aid 1.4-volt battery, which usually comes in a six-pack and is not very expensive.

Several internal parts may fail on a forty-year-old camera, and the SR-T 101 is no exception. The only serious trouble is related to the exposure meter movement itself, in which the tiny coil tends to break, this situation requires a replacement. The back door rubber sealing foam will usually need replacement, and so will a small strip of same cushioning the mirror when it goes up. A strip of this may be cut from a similar sealing material from a hardware store. All other problems are easily put right with a minimum of effort and tools, unless the camera is worn out, which rarely happens. In fact, anybody who figures out how to remove the top cover without causing any damage may repair it oneself.

During the ten-year manufacturing period of the Minolta SR-T101, many small changes were made to the camera body. Several of these changes are easily detected and they can help determine time of manufacture to within a few years. It should be noted that any part of a camera may be replaced due to repair and smaller parts are more easily swapped, but normally these features may be considered original. Top cover and base plate are parts usually replaced due to impact damages, and a replacement top cover would not have the original serial number.

The lack of mirror lockup (MLU) on an SR-T101 is not an exact indicator of its age. MLU first began to be discontinued early in the transition to the second generation, but did continue at least until the third generation SR-T.

Camera ads from the 1970s boast of its CLC (Contrast Light Compensator) metering, calling it "the brain". CLC is a form of TTL metering with two CdS cells. It compensates for over-exposure by assuming that the upper side of the picture is the sky (overcast) and that the lower part is the subject you want to photograph. ISO values can be set from 6 to 6400.

The Minolta SR-T 101 was one of the first cameras to have full-aperture TTL metering. This was possible thanks to the fact that Minolta had placed the aperture ring on its Rokkor MC lenses close to the camera body. This way, the position of the aperture ring MC tab communicated mechanically to the metering system inside the camera. What is actually transmitted is not the aperture itself, but the offset between the selected aperture and full aperture.