The Konica F (shown above with 52mm f/1.4 Hexanon lens) is one of the most sought-after and legendary of all classic 35mm SLRs. It was a groundbreaking camera in its day and the very first Konica 35mm SLR. The F was produced in very small quantity, estimated between 600 and 1500. There are no records to tell us exactly how many cameras were made, but it's believed serial numbers are sequential and numbers up into the low 1500s are known to exist. On the other hand, top covers of the camera bear the imprinted serial numbers and spare parts including the camera's top appear to have been part of that numbering sequence (Source here is a spare parts catalog for the F). Because of this, it's likely not all F's manufactured were assembled and sold. Due to the lack of records, it's impossible to say how many actually were assembled and shipped for sale, if the assemblies were built in the sequence of the serial numbers (unlikely... the top cover pictured in the spare parts catalog, which is made up of actual B&W photographs, is a low serial number in the 100s), how many were held back unassembled as a spare parts supply, if any of those ever went on to be completely assembled, or how many might simply have been returned unsold or left unassembled for other reasons.

With its introduction in February 1960, the F was the first 35mm SLR to achieve 1/2000 shutter speed and did so with a Konishiroku Hi-Synchro shutter that was actually a progenitor of the revolutionary Copal Square shutter (Note: later in the era of the T2 and T3 models, the 1970s, there was a Copal Hi-Synchro shutter, referenced in Konica literature). The metal blades and vertical run of the Copal made for a very durable and accurate shutter that became the norm for 35mm SLRs during the 1970s and 1980s. Most modern digital and 35mm film cameras still use shutters that are similar and might easily be considered descendants of the Konishiroku and Copal shutters. The very early Konishiroku shutter is known to be a bit more finicky and delicate than the later Copal; However, besides the exceptional 1/2000 top speed, it also boasts a very fast 1/125 flash sync speed. (Note: Canon also produced a 1/2000-capable camera, the Canonflex R2000, which was offered later in 1960. It uses an older-style, horizontally running cloth shutter, 1/60 flash sync.)

The F was very highly automated for its day. It uses a fully cross-coupled, selenium-cell meter with a match-needle method and provides linkage to the interchangeable lenses to make exposure setting easy. Both the aperture and the shutter speed appear on the dial on top of the camera. The metering system was one of the most advanced of its day and some say this was the first Japanese-made 35mm SLR to incorporate a built-in, cross-coupled light meter.

A rear view of the F would give a clue to another interesting feature of the camera. The film door protrudes slightly in the middle. This is because the film pressure plate is designed to retract temporarily while the film is being advanced, allowing the film to move more freely and to reduce the chance of scratches. I can't help but wonder if any earlier cameras ever had this unusual feature. Some much, much later ones did (such as certain Contax SLR models).

Only four premium quality lenses were offered with the F and are unusual to that camera. They are a Hexanon 35mm f/2.0, Hexanon 52mm f/1.4 (49mm filter thread), Hexanon 85mm f/1.8 and Hexanon 135mm f/2.8. All have the same 40.5mm bayonet mount flange diameter as later Hexanons sold with the FS, FP and FM. What sets the F lenses apart from later lenses is the linkage that connects with the metering system of the camera body. F-specific lenses can be difficult to fit on the later cameras, and vice versa.[1] The ability of the F to work with the many lenses intended for the Exakta thanks to an adapter sold by Konishiroku was touted as a sales point of the camera.[2] 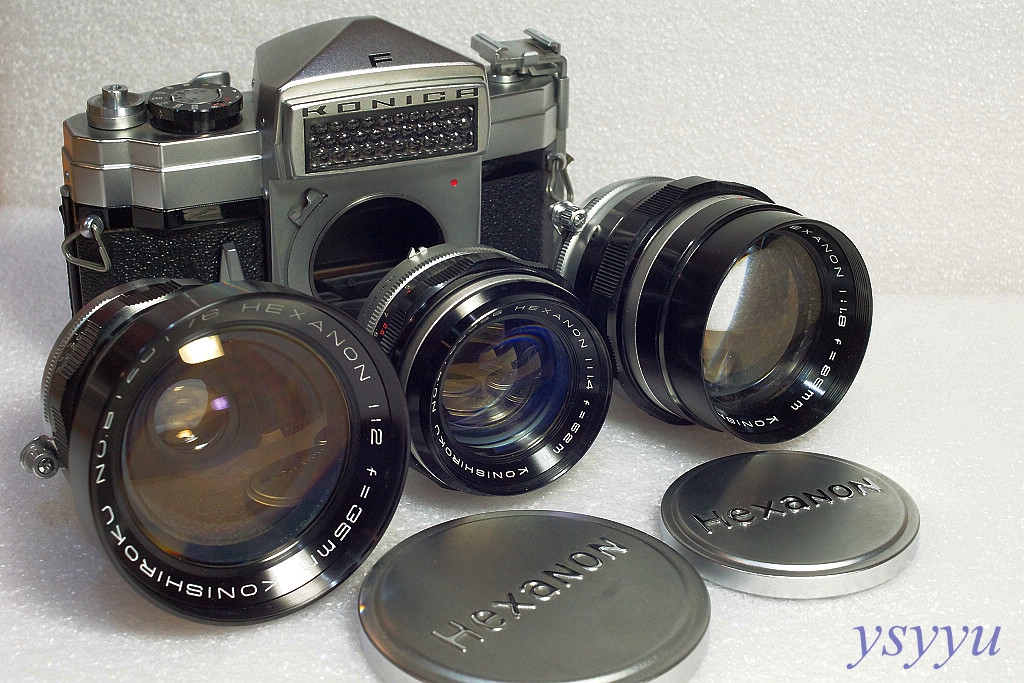 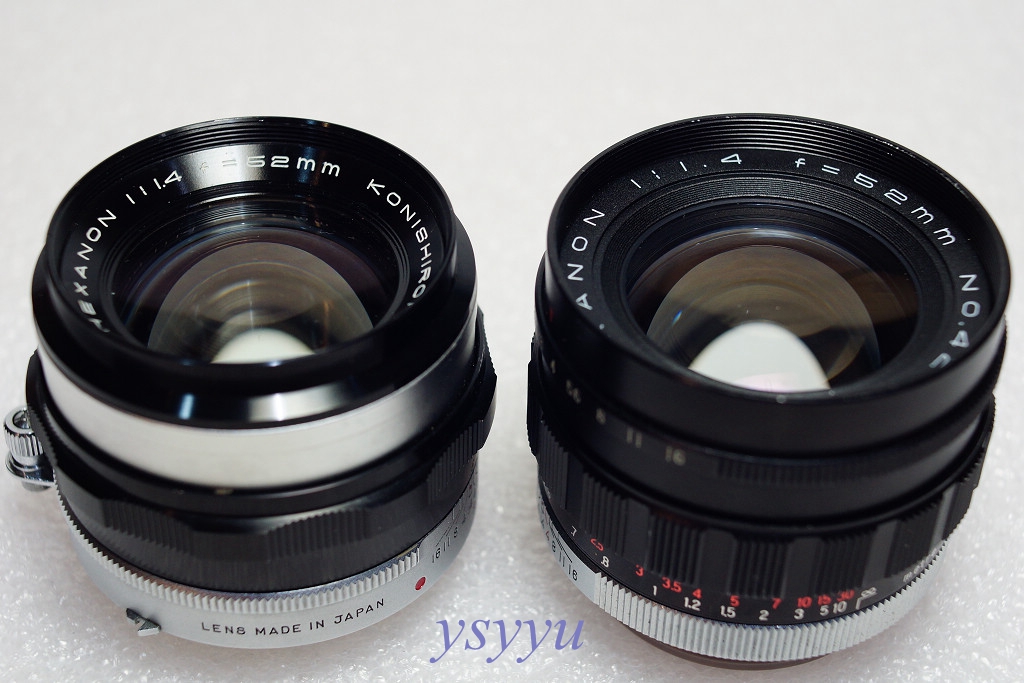 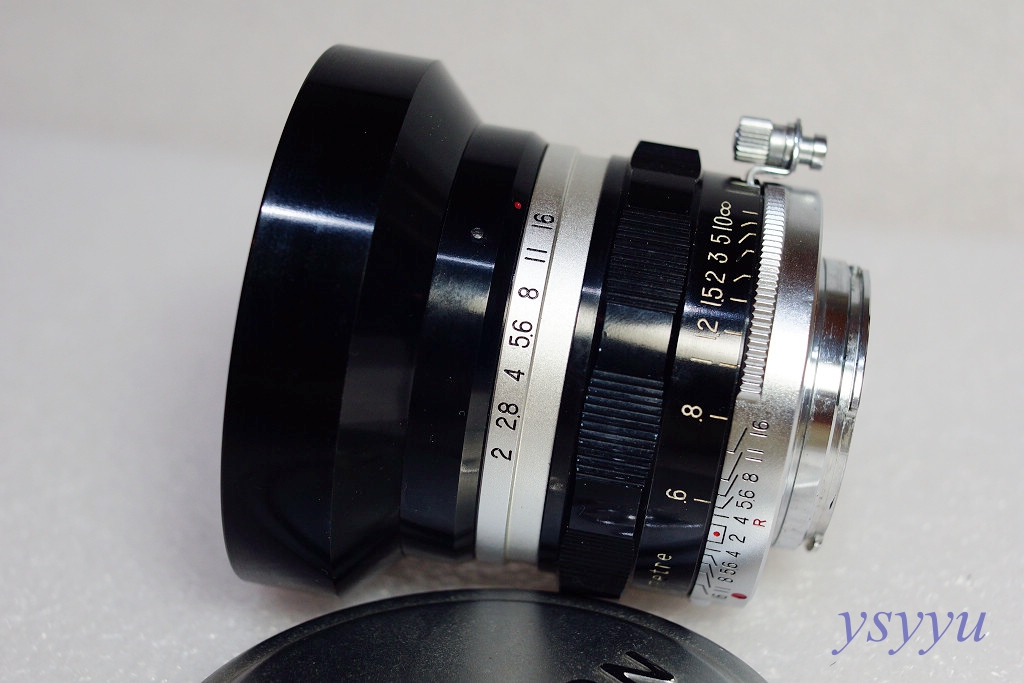 Shown above is Hexanon 135mm f2.8 lens that was offered along with F. The aperture of this particular lens is strictly manual operation... The lever is used to stop the lens' 10-blade diaphragm down from f2.8 to f22, with light detents at full stops and the setting displayed in a window near the base of the lens. It is unkown if cap shown is original to the lens shown. Other F-specific lenses are fitted with a silver metal cap imprinted "Hexanon" and not "Konica." The 135mm f2.8 appears to have been the only F-specific lens that continued to be offered with the FS or other later models, perhaps due to its manual aperture design.

NOTATION: The possible issues regarding interchangeability of lenses made for the F and lenses made for use with the later cameras are observations of current Konica F owners, including myself. The F was a very rare camera, and it's specific lenses were even more rare (except for the normal 52/1.4 which was probably produced in equal numbers), so documentation such as the Herz booklet - which I'm also familiar with - are primarily based upon the later cameras and lenses. Neither the F instruction book nor the later models' instruction books or lens catalogs make any mention of the differences. While it's true that all the lenses shared the same bayonet mount, other differences are easily seen in the aperture control linkage of the F and the four lenses used with it (35mm f2, 52mm f1.4, 85mm f1.8 and 135mm f2.8 Hexanons), as compared to the relocated, smaller and simplified aperture control linkage of the three later camera models. In the FS documentation, the 35/2, 85/1.8 and 135/2.8 sold along with the F are still mentioned. Only the 135mm f2.8 Hexanon that was originally sold with the F was shown in literature that accompanied any of the later cameras, as an optional lens. This particular lens was manual operation aperture and so is more interchangeable. I suspect that once existing supplies of the 135/2.8 Hexanon were exhausted, no further copies were produced. Later lens catalogs and literature only list a more common 135mm f3.5 Hexanon lens. - Alan Myers, 2008

The F has an interchangeable viewfinder. It is the only production Konica SLR to ever offer this. An accessory waist level finder was listed as available in the instruction manual. In addition, a chimney/magnifying finder is known to exist. The focusing screen was not interchangeable but included a split image focus assist, a nice feature that was not offered again on another Konica camera until around 1970 (Optional on the Autoreflex T and T3 models, standard on the TC 1976).

The F also had depth-of-field preview and Konishiroku offered a line of accessories for use with the camera and its lenses. Konihoods and Konifilters were available in matching tan leather cases.

Macro accessories were offered, too. There were so-called "close-up" filters, as well as macro extension tubes offered. A macro bellows might not have been offered initially, but was available within a year or two. No dedicated macro-specific lens was offered in the early Konica mount system.

A tan "ever-ready" case with red felt lining was available for the F. Lenses and their accessories were supplied in matching cases.

A very fine Konica F with a Hexanon 52mm f/1.4 standard lens might be expected to sell for $2000 to more than $3000 US (2003-2005 auctions). Even in poorer condition, this camera is known to sell for $2000 or more. A very badly damaged body brought over $600 US at auction in 2005. The F-specific 35/2, 85/1.8 and 135/2.8 Hexanons are also very rare and pricey. In all likelihood, these optional system lenses would have been produced in far smaller quantities than the camera itself, since many 35mmm SLR buyers never bought a second or third lens, and simply used the normal lens that was provided with the camera originally.

A very nice Konica F camera with a 52mm standard lens sold on Ebay for $2550.59. The camera was in mint condition but the shutter did not seem to function correctly. It's not uncommon for the F shutter to become very sluggish from lack of use. The camera in the photo does fire, but the shutter and mirror mechanism takes a long time to complete it's entire cycle. It's difficult to have the camera serviced. Knowledgeable repair persons are reluctant to touch an F, due to the camera's rarity, value and complete lack of spare parts.

As a side note, a prototype of this camera shown at a camera show in Japan in 1959 was called a "Koniflex 35" instead of the "Konica F." In his 1958 inventory list, Ansel Adams notes a "Koniflex 35." It is also mentioned and briefly but not very clearly shown in a 1957 documentary film about Adams, by Beaumont and Nancy Newhall. It would not have been at all unusual for a manufacturer to put prototype cameras into the hands of well known photographers for testing (Konishiroku also did so with Norman Rothschild and others). But, this can't be confirmed. So though possible, perhaps even likely, this has to remain conjecture if Adams actually used one of these cameras. Most of Adams' work was done with medium and large format cameras, but he did use some 35mm (mostly Zeiss). In careful examination of the film mentioned above, the camera is difficult to see, but looks in general more like an early Contaflex II, rather than a Koniflex 35.

There was also a Kowaflex 35mm camera being offered in the late 1950s.

Perhaps due to the similarly named Koniflex and Koni-Teleflex TLR models (mid-1950s), and the similarly named "Konilette 35" being offered in the late 1950s, as well as the "Nikon F" that was introduced to the world in 1959, instead of "Koniflex 35". "Konica F" was ultimately chosen as the name for the final production model that was marketed and sold.

Herz provides four "important cautions" specific to the F.[3] These are:

Note: Hertz' precautions are a word for word extraction from page 2 of the Konica F instruction manual.