The Kodak Retina IIa was a rangefinder, folding 35mm camera made by Kodak AG, the German subsidiary of Kodak.

The designation Retina IIa can refer to two different camera production runs, separated by a gap of 10 years. Retina collectors and Retina historical specialists refer to Retina models by the factory Type number given before the camera name.

The pre-WWII Type 150 Retina IIa was a redesign of the top plate, combined rangefinder/viewfinder and frame counter of the preceding Type 142 Retina II. It had a film advance knob on top and a depth-of-field scale wheel on the camera body's bottom. The 1950s models got a film advance lever instead.

The war-time German government ordered a stop to all camera production at Kodak A.G. in the summer of 1941.

The second camera series designated Retina IIa was the Type 016 Retina IIa. It was manufactured from 1951 to 1954. At first, a COMPUR-RAPID shutter was used. This was replaced with a SYNCHRO-COMPUR shutter. 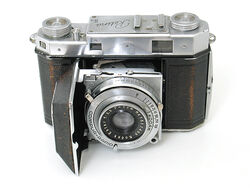 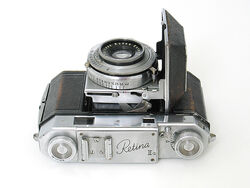 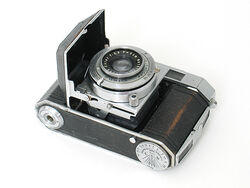 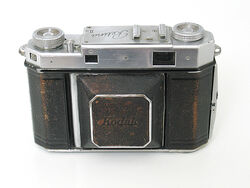 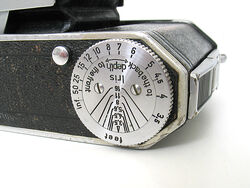 Kodak Retina IIa Type 150. Depth-of-field scale wheel at the bottom of the camera. 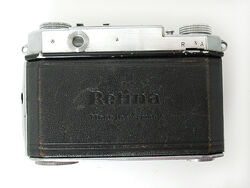 This postwar IIa improved upon prior Retina II versions with the addition of a rapid-wind lever, which was coupled to also cock the shutter. Fitting this feature into the already-established folding body style required a complex linkage, whose gearing proved vulnerable to damage in this and subsequent folding Retinas.

Classic-camera aficionados such as Stephen Gandy have commented that the IIa may represent the "sweet spot" of the entire Retina series [1]: The IIa had been modernized to include rangefinder focus, excellent-quality f/2.0 lenses from Schneider and Rodenstock, and rapid advance, in a compact package scarcely larger than the original 1934 Retina.

However the IIa had not yet succumbed to the feature creep of built-in metering and interchangeable front lens elements, which necessitated the larger, plumper body style of the post-1954 Retina models.

On the negative side, the viewfinder of the IIa is not especially large or bright; and the shutter speed sequence was not yet the standard geometric series adopted by camera makers in the late 1950s. However the coated 50mm f/2.0 Retina-Xenon lens remains a credible performer even by modern standards.

The frame counter of the Retina IIa 016 is considered as its Achilles heel. The counter goes backward from '36' to '0', and is operated by a rather delicate spring. When this spring breaks, the counter will no longer function. This part is not readily available.

Retrieved from "https://camerapedia.fandom.com/wiki/Kodak_Retina_IIa?oldid=125297"
Community content is available under GFDL unless otherwise noted.