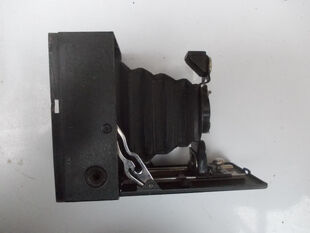 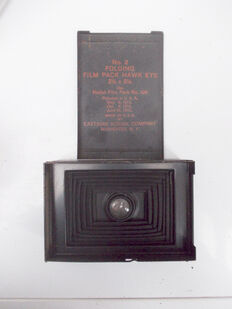 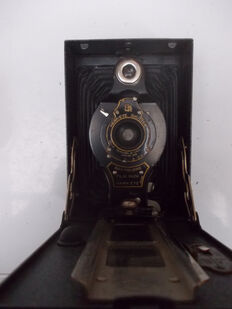 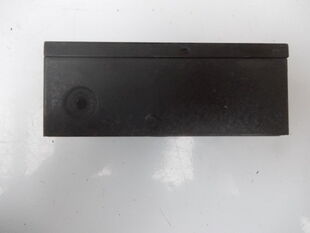 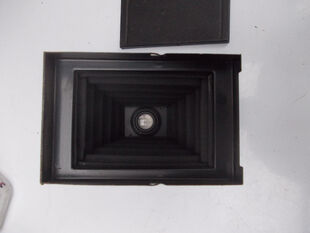 It probably wasn't a very expensive camera. The Hawk-eye No. 2 has a cardboard body (on the example in the photograph, the cardboard is showing on the edges). The body is covered with black leatherette and it has a real leather strap on top. They were made from 1913 onwards and this particular oneg was produced in Great Britain (see leatherette imprint). It uses 120 film to make 6×9 cm pictures. Since it was made in Britain, 2 ¼ × 3 ¼ inch is probably a better way of describing the format.

The Hawk-eye No. 2 has two viewfinders. Both are prism finders, one seen from above and the other from the right side of the camera. There is a simple meniscus lens. An ad placed inside the camera advises you to insist on Kodak 120 film, either regular or Verichrome. Verichrome Pan is of course not a colour film, but a black and white film with better sensivity to red (see link).

Transport and opening the camera[]

Film is wound with this double lever, turned in the direction of the arrow. Frames are counted via a red window in the back. Opening the camera is less obvious. Even after opening the eye-locks, the two parts stay firmly together. Only after winding and pulling out the double winding lever will they come apart.

The shutter is of the simple "guillotine" type. It has just one speed, which sounds like 1/30s. Two apertures are available through a pull-out strap on the top of the box. This will put openings of different diameters in the pathway of the light. 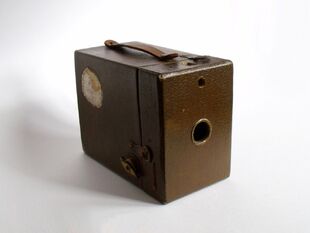 Kodak Eastman Anniversary
The Hawk-Eye No. 2 model C of 1913 was a simpler model with just one viewfinder, and no choice of aperture. The camera was reissued in 1930 as anniversary giveaway of Eastman Kodak Co. for 550,000 children at the age of 12.