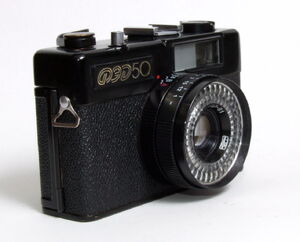 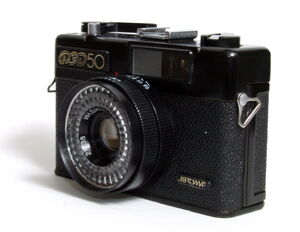 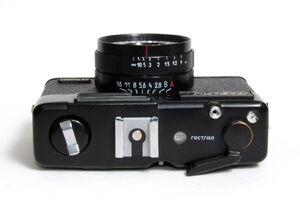 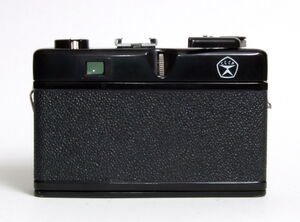 FED 50 type 1c, Engraving on the back cover Soviet Union quality logo
Add a photo to this gallery

The lens is the "Industar 81", with focal length of 38mm, maximum aperture of f2.8 and minimum aperture of f16, accepting 46mm screw-in filters. It has a selenium meter which automatically selects shutter speed and aperture for the exposure to be correct. The meter is located around the lens and when the lens cap is on, it prevents firing. In the manual mode, the camera will fire always using the 1/30s shutter speed, allowing the photographer to choose any aperture from f2.8 to f16. When bulb (B) is selected, on the other hand, the camera will be fixed in the f2.8 lens aperture. In automatic mode, the camera will choose the both aperture and shutter speed, from 1/30s to 1/650s and aperture from f2.8 to f14. It has a hot shoe.

The body is mostly built in metal, except for some minor parts which are plastic. Over the body it received a cover in vinyl. According to the user's manual, the camera comes with shoulder strap, magazine, lens cap, flash lamp clip stopper, lens hood, soft case, packing box and manual of use.

Some curiosities of this camera:

Retrieved from "https://camerapedia.fandom.com/wiki/FED_50?oldid=126362"
Community content is available under GFDL unless otherwise noted.