It is a new design that is quite different from the FED-1. It has a longer rangefinder base (67mm), a combined viewfinder and rangefinder window, adjustable diopter for the viewing window, a self-timer (later revisions), and a detachable back for film-loading.

Fed-2 was produced fairly long time and offered with many types and several different features, like the engravings, lenses, shutter speeds, self-timer etc. 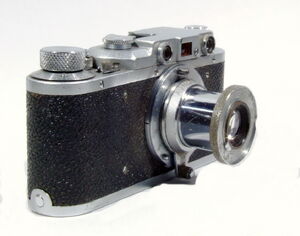 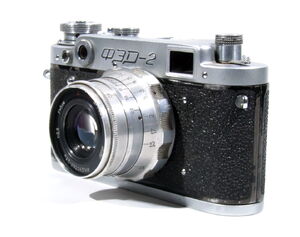 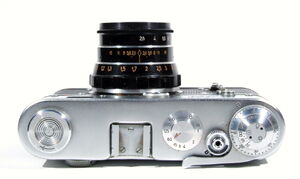 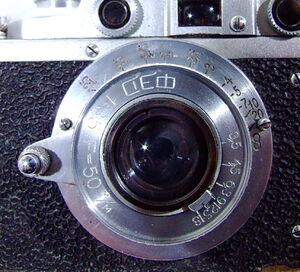 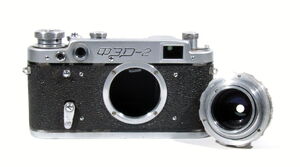 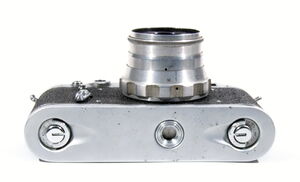 To load the film, two locks in the base of the camera need to be turned. The entire back and bottom can then be removed as a single unit, allowing easy access to the film chamber. Standard 35mm film cassettes are used, with film being wound onto a removable take-up spool (the latter often becomes difficult to remove on older cameras). Winding the film cocks the shutter and forwards the frame-counter simultaneously. The FED 2 has a manual frame-counter located below the wind-on knob, which must be reset by hand when loading film.

After detaching the back, two screws on the underside of the camera allow you to adjust the spring tension and change the shutter speeds, which may have become slow over time. As with similar cameras, it's important to cock the shutter before operating the shutter speed dial. Failing to do so may harm the mechanism. When firing, this dial wil rotate. After recocking, the speed set will be indicated correctly again.

The Fed takes 39mm screw lenses. The one shown above is a 5cm collapsible Fed lens. Lots of Feds come with Industar lenses. On the collapsible Fed lens, the aperture is set on the front and focusing is done with a lever near the body. The rangefinder is coupled to the lens. The field of view in the viewfinder is that of a 5cm lens. For other focal lengths, a separate turret viewfinder was placed on the accessory shoe.