The Exa 1b is a 35mm film SLR camera, manufactured by VEB Pentacon, former East Germany, and produced between 1977-85. It is a continuing model of the long lasting Ihagee Exa series by Pentacon.

VEB Pentacon licensed the production of screw-mount Exas to Certo Camera Werk, Dresden-Großzsachwitz, a part of VEB Pentacon. Cameras built by Certo have serial numbers preceded with a letter C. Some late Exa 1b version 4.4 and all Exa 1c version 4.5 made by Certo. [1] The later models of Exa 1b have black plastic top- and bottom plates.

Exa 1b body is virtually identical to Exa Ia except rewind knob replaced with a crank and the lens mount is M42, instead of the traditional Exakta bayonet mount. The camera also has internal aperture coupling for M42 automatic lenses.

Exa 1b is not a real part of the Exakta/Exa system, although its family relationship with Exa cannot be denied. Exa 1b renamed as Exa 1c without practically any other changes.

There are 4 versions of the Exa 1b according to Andrzej Wrotniak [2]. 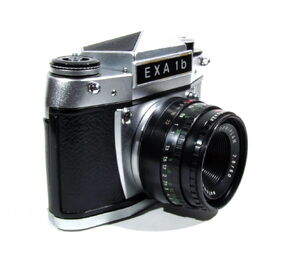 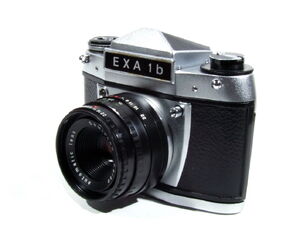 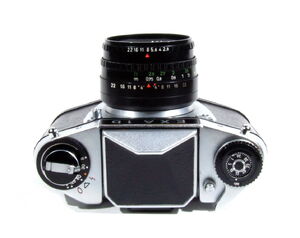 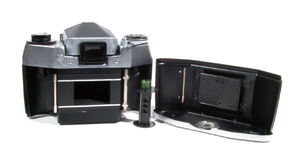 This data belongs to the version 4.1 in the photos.