cit: "The Ful-Vue camera is really a very simple camera. It consists of a light-tight box. In front of the box there is a hole, over which the lens is fixed. Behind this hole is the shutter. There is a second lens in a second box above it. This produces a picture on the viewfinder on top of the camera. In the back of the box is another hole covered by a red window. This helps you in winding the film on, which you do by the knob at the side of the box near the top." [Marcel Natkin].

The earliest Ful-Vue version of 1939 was a typical box camera with back door, but already having the characteristic big viewfinder. Like other box cameras it had a back door and an inner camera part which could be taken out of the box to load the film. In 1946 the camera was redesigned, getting away from average box camera design. Then the inner part of the camera was fixed to the side panel with the film winding knob. The whole unit could be pulled out of the camera sidewards after unlocking it with the knob on the other side panel.

Shutter speed was 1/30 sec. in instant mode and B in time mode. Focusing was possible by pulling the lens out for close exposures. Pictures were 6×6cm on 120 film.

In 1950 further improvements were made, the new flash synchronized shutter, the turnable lens barrel allowing three different distance settings instead of two, an all-plastic front panel, and an optional flashgun. The improved version was called Ful-Vue II. This was succeeded in 1954 by the Ross-Ensign Ful-vue Super, which had a flat front plate extending around both lenses, a cast alloy body (in place of the sheet steel) and a collapsible hood around the viewfinder. Its red window was closable. The film loading was eased another time by means of the removable back-and-bottom part which was held just by the clamp on the bottom. A more elegant flash unit was available, mountable without cable to a side panel of the camera.

Except for the Ful-Vue Super, which used 620 film the Ful-Vues use(d) type No. 120 rollfilm. An old Barnet-Ensign Ful-Vue may need some manipulation by simply bending the long metal strip that is part of the rollholder a little bit to achieve the necessary tension of the film. Using both rollfilm sizes in one Ful-Vue is not possible. The complete Ful-Vue series serves as a model for TTV cameras, cameras used for taking digital images through their amazingly big finders (through-the-viewfinder photography). 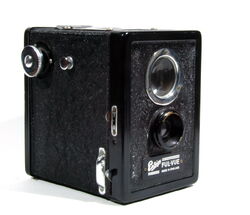 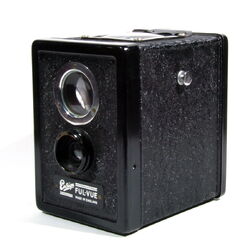 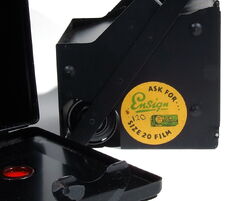 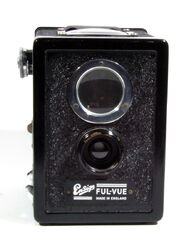