Don@Eastwestphoto.net-- My version Zeiss Contax S has no x-synch in the tripod socket and its the self timer model. I find no serial number on this camera. Also I have a rare m42 CZJ Nr.3277933 Biotar 5.8cmF:2 in heavy Brass & Chrome, its a RED T and coated. The rewind knob on the camera has a blk. dot 10~100 red Dot as a ASA wheel. I believe variations in this camera exist! Follow @xwestsidelouisx on twitter

In 1948 the two branches of Zeiss Ikon, East and West, were finally separated. In a series of lawsuits the Eastern branch would lose the right to use the historical names, like Contax. They continued to use the Contax name in the Eastern block market, but adopted the name Pentacon for the export to other countries. Pentacon comes from Pentaprism Contax, but is unanimously qualified as an unfortunate choice. Maybe something like Pentax would have been a better idea! 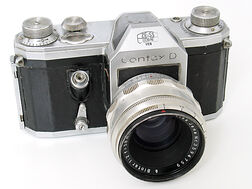 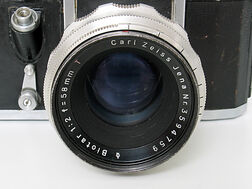 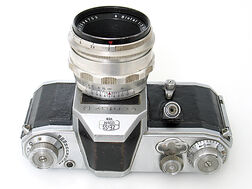 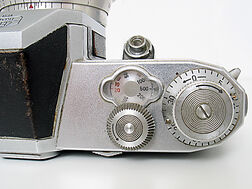 A user's point of view

Retrieved from "https://camerapedia.fandom.com/wiki/Contax_S?oldid=122651"
Community content is available under GFDL unless otherwise noted.