The Baldax was a series of folding cameras made by the German company Balda. 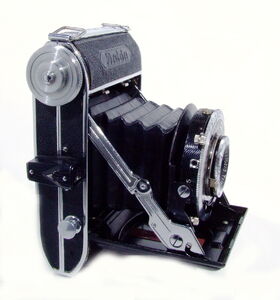 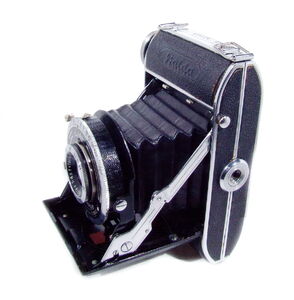 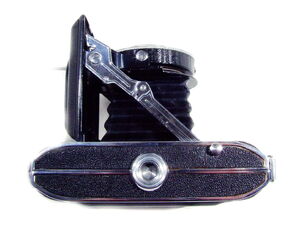 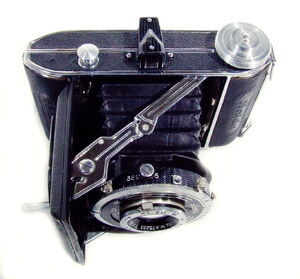 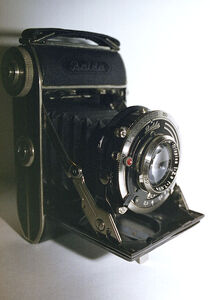 The prewar Baldax was made throughout the 1930s in three main variants: a 4.5×6 small model for #00 shutter size, a 4.5×6 large model for #0 shutter size and a 6×6 model (#0 size). All the Baldax had solidly built diagonal struts, with a typical shape, larger at the base. Some had a folding optical finder and others had a tubular optical finder. The body shape somewhat evolved during the production.

The Baldax was also sold under various distributor names, like the Lisette by Porst, the Noris by Müller, the Ysette 4.5×6 and 6×6 by Rodenstock (equipped with Trinar lenses) or the Robra by Josef Rodenstock.[1] It was also the basis of the Plaubel Roll-Op models, both in 4.5×6 and in 6×6 versions.

In Japan it was copied by Proud for the Semi Proud, which was in turn the basis of the Semi Olympus, the first Olympus camera. Motodori made a full line of copies of the 4.5×6 model, with the Semi Lester, Semi Victor, Semi Condor and early Zeitax, and copied the 6×6 model for the Victor Six and Condor Six. Other Japanese copies were the early Semi Rody made by Shibayama, the Kelly sold by Miyoshi, the Semi Rosen III sold by Ōsawa and the Semi Adler, Adler III, Adler C and Heil sold by Riken. Some of these cameras were simply name variants of each other.

(Data belongs to the 6x6cm 1932 model camera in the gallery)

The postwar Baldax was an evolution of the prewar model, sold at the beginning of the 1950s by the West German company Balda Bünde. It existed in 6×6 version and had a top housing incorporating the viewfinder and an exposure counter. At the same time, the Super Baldax was the same model with a coupled rangefinder. The Baldix, Mess-Baldix and Baldi 29 were derived from the postwar Baldax.