Ansco was an American manufacturer of camera equipment in Binghamton, New York.

In the 19th century its predecessor E. & H.T. Anthony Co. was the largest distributor of photography supply in the U.S.A.. It started in 1841 or 1842 as daguerreotype gallery Edward Anthony in New York and expanded its activity becoming photography supplier in 1847. In 1852 Edward Anthony's brother Henry T. joined. In 1870 the company started making cameras. The company was the first to patent a roll-film holder that could be loaded in light[1].

In 1902 it was merged with Scovill & Adams into Anthony & Scovill, this name being abbreviated to Ansco. Ansco took over film maker Goodwin, photo paper maker Columbia and the American Photo Products Co.. Then it was merged with Agfa in 1928, to be called Agfa-Ansco. Additionally to its own products Ansco began to sell rebadged or licensed cameras of some other makers, especially of Agfa, and it built a new film factory. In 1939 Ansco was renamed to General Aniline & Film (GAF). During WWII the company became state-owned because of its relations to Germany, and was forced to produce sextants and military optical rangefinders, and then it was sold as an "enemy asset".

After the war the company was again Ansco and reached its peak as camera maker with a production of 2 million cameras per year. Since the 1950s it sold again rebadged cameras, made by Agfa, Chinon, Ricoh and even Minolta. The company became GAF (General Aniline & Film) in 1967 and made some film and cameras branded GAF, and in 1978, Haking of Hong Kong acquired the rights to the Ansco trademark. Ansco cameras continued to be made until the 1990s by Haking, while GAF became Anitec. In 1992 Anitec celebrated the company's 150th anniversary. It became part of a group which was taken over by Kodak. The factory in Binghamton was closed in 1998 and demolished in 2000. 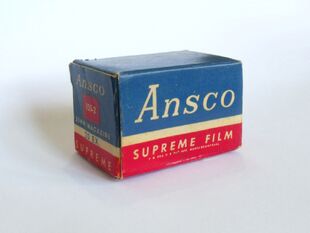 In English and French: