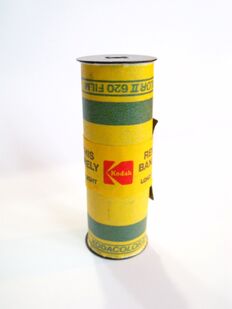 'See the Category: 620 film for a list of cameras using this film.

620 (Six-20) roll film, introduced by Kodak in 1932 and discontinued in 1995[1], is basically the same as 120 roll film; it has the same width and length. The only difference is the spool which holds the film, in case of the 620 roll the core of the spool and the end flanges are smaller than that of the 120 roll.

Many cameras were made to use 620 film, and such cameras normally cannot take 120 film. It's still possible to use this type of camera either by:

Respooling has the advantage of using the camera as it was intended, without jamming. If you wish to respool, you need two 620 spools. It is necessary to rewind the 120 film onto a 620 spool before it can be used in the camera.[3][4][5] Novices seeking to try out a vintage camera should note that this process must take place in absolute darkness, using a darkroom, dark-box, or dark-bag.

620 spools can also be bought from some suppliers, and one can occasionally be found in an old, forgotten, 620 film camera offered for sale used. A mechanically-inclined person could make their own 620 spools.

There still remain a few antique film suppliers who may offer 620 film for sale at a premium price. It is generally rewound 120 film. 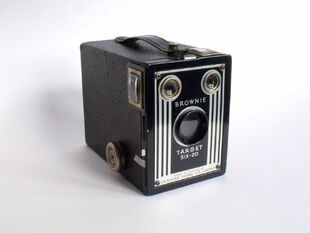 NOTE: If you don't do your own processing you have to ask to have your spools back otherwise the photolab will toss them away!!